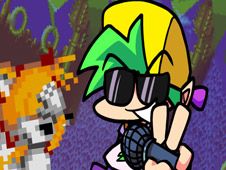 What is FNF Vs Dorkly Tails (B3-Side Vs Dorkly Sonic)?

Welcome to FNF Vs Dorkly Tails (B3-Side Vs Dorkly Sonic), which was a mod that had to come around sooner than later, since many of these beloved classic video games characters are getting their Dorkly versions B-sides, and today you go up against Sonic's best friend on the song called Payday!

Let's go up against Dorkly Tails in an FNF B3-Side battle!

From the game's main menu you have to hit play, and then keep hitting your notes according to the chart until the conclusion of the song, if you want to win. So, when you see arrow symbols float and match above BF's head, that is when you need to press the identical arrow keys.

Be careful not to miss hitting said notes too many times in a row, or you end up losing and having to start again from scratch. Good luck and all the best we wish you all!