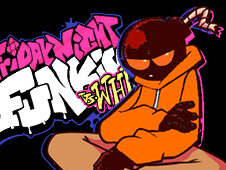 What is FNF vs Whitty B-Side?

We love it in the Friday Night Funkin' Games category of our website when we have to return characters, especially when they are beloved, and you know that they come back only when they are popular, which is definitely the case for Whitty, one of the most popular mod characters so far, who's bringing awesome new songs into the mix, so why not fight against him with them?

Whitty is back for more rhythm fun, are you ready?

Whitty is the man with a bomb for a head who can easily get angry, and if he gets mad, he might even explode, and you have to help Boyfriend defeat him in a rhythm battle, something that you will do on the new original remix of the Bruh song, which is the most popular song featured in his mod, now in a new shape, but with the same funk!

What you do is tap the arrow keys on your keyboard at the same time as the arrows floating around Boyfriend match the arrows above his head, and know that if you miss too many of these notes in a row, you lose, because you will have messed up the song too much, so don't let it happen! Good luck, we wish you the best, and we hope to see you play even more of our new games of the day!