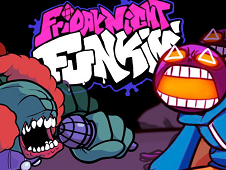 Tricky vs Whitty Mad Overload (Madness x Ballistic) is one of the most anticipated duels of the Friday Night Funkin' era because these characters have always been very much in the spotlight of FNF fans, and this time you will be able to start a battle between these well-known characters. Boyfriend is the one who will sit on the box, instead of Girlfriend, and will arm the whole battle.

Tricky vs Whitty, an honorable duel!

As a player, you will have to help Whitty defeat Tricky and as you can see, Whitty's character is the evolved one, Mad Overload (Madness x Ballistic), but during the game, the Tricky clown will evolve into the familiar shapes that we know them. Even if the game starts easily, in a rather slow way, in a short time the speed with which you have to move will increase more and more and in this way you will have to try to take advantage of all the experience you have to you managed to win this battle.

Use the arrows to fight!