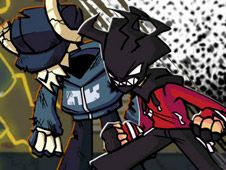 What is FNF: Tricky & Whitty vs Tabi & Agoti?

We are not at all surprised that we are starting to see team-ups between characters from FNF, since sometimes it requires a bit of help to win a rhythm battle! Well, one of the first such team-up games that you get to play in this category right now, and definitely not the last, is this one called FNF: Tricky & Whitty vs Tabi & Agoti!

Tricky and Whitty are one team, while Agoti and Tabi represent another team, with you representing the team on the right. There will be both individual duels, and parts of the songs where the characters are going to sing duets.

A team rap battle in FNF? Sign us up!

Despite there being more characters featured in the rap battle at the same time, the format in which you play this game remains the same as with the others, but if you're new to the series, learn about it here first!

You will use the arrow keys to hit the notes of the songs, so when arrow symbols are matching above your character, you need to press the same arrow key to hit that note.

Don't press the wrong keys, or press the correct ones but at wrong times, because too many of these mistakes one after another will cause you to lose the game. Good luck to you, and we hope to see more of you around, for sure!