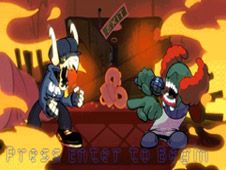 What is FNF: Tabi vs Tricky [Genocide + Madness ] Remix?

Genocide and Madness are two of the most iconic songs in Friday Night Funkin', them being songs of Tabi and Tricky, and today the two characters are going to battle it out in a rhythm battle against one another, and they are doing it on a remix song that mashes up the two original ones into one.

Tabi Vs Tricky, the most intense fight of the season!

Choose a level of difficulty before hitting the play button, and then give it your best to reach the end of the songs, as you try your best playing all of their notes, because only if you do so can you reach the conclusion and tilt the progress bar fully towards you.

Use the arrow keys for this, so when you see arrow symbols above BF's head being matched with one another, press the same keys yourself, but don't miss doing it too many times in a row, or you lose the whole game. Enjoy!