FNF: Tabi the Ex-Boyfriend in HD 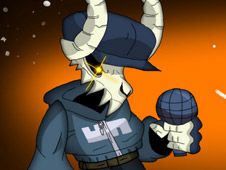 What is FNF: Tabi the Ex-Boyfriend in HD?

Tabi is the angry and horned skeleton who is the Ex-Boyfriend of GF from Friday Night Funkin, so of course, there would be a confrontation between him and Boyfriend at one point, one that you have maybe had many times on our website before, but you now get to re-experience the original mod, only with an HD remaster where everything looks and sounds better. Defeat this popular antagonist on the following custom songs:

Show Tabi that Boyfriend is better once more, this time in HD!

You can duel against this character in both the story mode and the free play mode, the choice is yours, and either way you've got the same goal, which is reaching the end of the songs by playing all their notes according to the charts.

To do this, when arrow symbols above BF match one another, you need to press the same arrow keys and keep doing it without missing, because too many misses mean losing the game.

A miss is either pressing an arrow too late, too early, or pressing the wrong keys, so don't allow that to happen, but instead, win, and have fun!