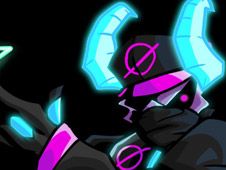 What is FNF vs Neo Tabi?

We know for sure that the visitors of our website who love to play FNF mods online for free on our website are always down to playing the latest FNF Neo Games that appear on the internet, since these neon-lighted versions of the characters are always a ton of fun to battle against, and today you are doing it against Neo Tabi, the Ex-Boyfriend, who is back with a new sprite and brand new remixes!

Defeat Neo Tabi in the sickest battle of the day!

It's your choice if you face off against this character in either the story mode or the free play mode, with your goal being the same either way, which is to reach the end of the songs by playing all their notes, something for which you use the arrow keys.

This means that when arrow symbols above BF's head match with one another, you will have to press the same ones yourself, but don't miss doing it too many times in a row, or you lose the whole game. Enjoy!