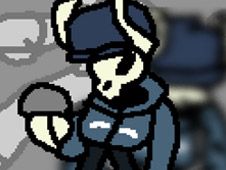 What is FNF vs Tabi EX But BAD?

The FNF but bad games we've had so far on our website had been received very well, and we're sure that this is also going to be true right at this moment, especially since the character that is featured in this new game is none other than the Ex-Boyfriend, Tabi, constantly one of the series' most popular characters, and we're sure you will enjoy battling him even in his bad version!

Why is this Tabi game bad?

Don't worry, the game does not look bad, sound bad, or play bad because the people making it are not good at their job, but it is because it was designed to be so. They took the original Tabi mod and stripped it down of all that it had awesome, and now it is way more fun to play it than in its HD version.

Help Boyfriend defeat Tabi and prove to GF that she made the right choice by leaving him and being with BF now! Get to the end of the songs and play all the notes along with the songs accordingly, without missing too many notes in a row, since that means losing the game, and you can't want that to happen!