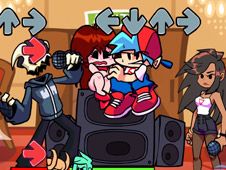 What is FNF: Tabi vs Ayana Sing My Battle?

FNF: Tabi vs Ayana Sing My Battle is a brand new and special mod to be offered by our team for all of you here for free, mainly because it sees the duet between the Ex-BF of Girlfriend, as well as the Ex-GF of Boyfriend, so it is a duet of exes who feel left out and are sad because they recently lost their partner! BF and GF will watch this new duet, and you will help them take it to the end!

Let the duet of ex-lovers begin!

In this mod, use the arrow keys to play the notes of the songs, so when you see arrow symbols above BF matching with one another, make sure to press the same arrow keys on your keyboard, and keep doing it until the end of the song to win.

Of course, be careful about the timing, because if you press the keys wrong too many times in a row, you will lose the whole game and have to start again from scratch. Good luck!