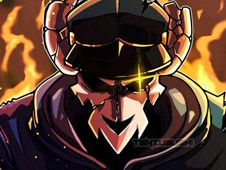 When it comes to the FNF mod characters that have made the most ruckus among the fanbase, and who people either love or hate, one of the top contenders is definitely Tabi, and that should not be a surprise at all, since he is a skeleton head with horns who rocks all the time, and he is the Ex-Boyfriend, so of course there would be lots of rivalry between him and our main beloved character of BF.

So, it is with great delight that today we are seeing the return of this character with the awesome new game called FNF Tabi Genocide Retrospecter Remix! This game features an amazing remix of the Genocide song by Retrospecter, whose previous remixes have really been awesome!

How to play FNF Tabi Remix:

Despite the Genocide song being longer and more difficult, the way you play it is the same. When arrows match above BF's head, press the same arrows on your keyboard to hit the notes, and make sure you hit the notes to the end of the song to win.

Making too many mistakes in a row will cause you to lose, so make sure you don't let that happen for anything in the world, and we are wishing you all the best!