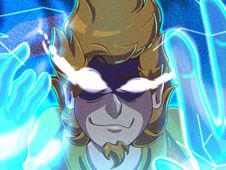 What is FNF vs Shaggy God Eater Retrospecter Remix?

RetroSpecter has done it again, and this time has made a remix of one of the most popular songs in the whole franchise of Friday Night Funkin Games, and, of course, we're talking about Shaggy's God Eater, which is the Super Sayan mode he enters where he becomes a beast of a rapper, where you will now have to defeat him again, this time on this remix that has four possible endings depending on how you progress, new charts, and brand new, fresh fun!

Challenge the God Eater and his new remix!

Well, when you see that arrow symbols above BF's head match one another, it is at that moment you need to press the same arrow keys, and you need to keep doing it until the end of the song to win, but be careful not to miss pressing the keys too many times in a row, since that happening means you lose.

We wish you all good luck and all the best, inviting you to stick around so that you don't miss the other new FNF mods that will still arrive!