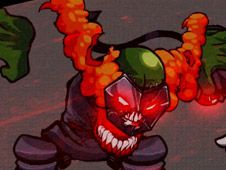 What is THE-GOD Vs Tricky (Fan-Made)?

Boyfriend, who now looks like Hank from Madness Combat meets Tricky in Nevada and will now battle against him on the song called 'THE-GOD', with their confrontations always being really exciting and crazy, so we are positive that the same will happen right now as well!

When you see floating arrow symbols match above BF's head, that is when you need to press the identical arrow keys to hit your notes, doing it until the song ends to win, but be careful not to miss hitting your notes multiple times in a row, that will lead to you losing and having to restart from scratch. Good luck, enjoy!