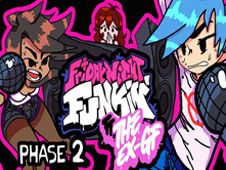 Ayana, the Ex-Girlfriend of our blue-haired protagonist has been quite a popular character in the world of FNF, ever since she made her debut, which is why fans made their own sequel to her one-song mod, which has now been added to our website, so let's have a battle between former lovers on the following songs:

Let's see if the sparks of an old love are still there, with music!

Whether you choose to face this character in the story mode or free play mode, the way you win is the same, by reaching the end of the songs, which is only possible if you play all the notes in your turn at the right times. If you miss hitting too many of the notes, you lose, so be careful about that!

So, when you see arrow symbols above BF match one another, make sure to press the identical arrow keys, but not too early or too late, since that's a miss. Good luck, we wish you the best, and clearly hope to see you around even more!