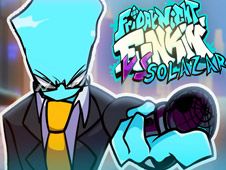 What is FnF vs Solazar (Fan-Made)?

Solozar is a fan-made character that looks like a being out of energy, one that wears a suit, and is a powerful being that you and Boyfriend will have to defeat in rhythm battle, and we are sure that you will have a lot of fun, especially since the song featured in this game, called GodRays, is a really fun one!

Boyfriend Vs Solazar, Man Vs God, who will win?

When you see that arrow symbols above BF's head are matching with one another, it is at that moment that you have to press the same arrow keys, and you have to keep doing it until the end of the song in order to win, but be careful not to miss pressing too many keys one after another, since that means losing the game.

Good luck we want to wish you all, and we hope that you stick around and have even more fun, because the day will be filled with one awesome game after another, believe us!