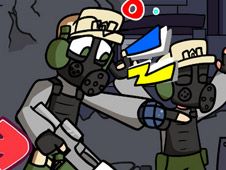 What is FNF: Friday Night Foundation Site (Fan Made)?

As the title suggests, Friday Night Foundation Site is a mod made totally by fans, as most modders are, where the modders of this game, who are also YouTubers, are the antagonists that you and Boyfriend will have to defeat in a rhythm battle, and they even brought along some awesome new custom songs:

Boyfriend Vs Ranger and Azri, who will win?

You can access the songs written up there in either the story mode or the free play mode, it's totally up to you, and in both modes, you still have the same goal, which is to follow the charts and reach the end of the songs by playing all of the notes during your turns.

This is done using the arrow keys, keys that you have to press at the same time as the arrow symbols above BF match one another, with you matching them in turn.

If you miss pressing too many of the keys one after another, you are going to lose, so you should be careful not to allow that to happen for anything in the world!

Good luck, and all the best we want to wish for you!