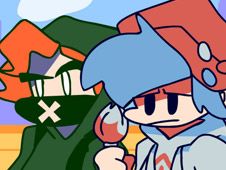 The original FNF soft mod had been received very well, so you can bet that this new fan-made version called Ben's Adventure will be received just as well, especially since it brings along two new awesome songs:

Whether you are playing in the story mode or free play mode, to win you do the same thing, which is playing your notes according to the charts until the song concludes.

So, when you see arrow symbols float and match above the head of your character, that is when you press the identical arrow keys. Don't miss doing it too many times in a row, you lose. Enjoy!