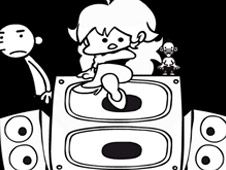 What is FNF: Diary of a Wimpy Kid (Fan-Made)?

Diary of a Wimpy Kid is a series of books which were later transformed into movies as well, and it features stickman drawings of various characters in it, just like the wimpy kid known as the main character of this series, who you will now go up against together with Boyfriend in a musical battle, all on a brand new awesome song called 'In a Wimpy Day'!

Don't be wimpy and win the music battle, right now!

Simply hit the play button, as there is only one mode you can play this game in, and you will have the goal of reaching the end of the song by playing all of its notes according to the charts. How does that work?

Well, when you see arrow symbols above BF match with one another, you will have to press the same arrow keys at the same time, and keep doing it until the end of the song.

If you miss pressing the keys multiple times in a row, you lose and have to start again, so be careful not to let it happen. Enjoy!

Among vs Creeper
ADVERTISMENT