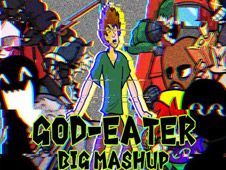 Shaggy from Scooby-Doo is known for being one of the best rhythm masters in the world of FNF Games online, which is why he has what is known as the God-Eater mode, where he is almost unbeatable, and in this game, all sorts of characters from the FNF franchise will try to take him on, with the characters changing places from one verse and turn to the other one.

Defeat Shaggy's God-Eater mode together with the FNF cast!

Despite the difficulty being raised up, the gameplay and format remain the same. When you see arrow symbols above your characters being matched with one another, you have to press the same arrow keys, and you have to keep doing it until the end of the song to become the winner.

Be very careful not to miss pressing too many keys in a row, because if that happens, you lose and will be forced to start all over again from scratch. Good luck to all those brave enough to take on the God Eater, and we hope that you stick around and keep playing the awesome new games of the day still on their way!