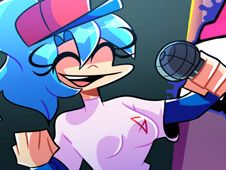 What is FNF vs Big Sister?

Did you know that Boyfriend has a big sister who taught him the art of rhythm, singing, rapping and music in general? Well, she is back from college or wherever she was, and since she heard her little brother was making a name for himself, she is challenging him to a rhythm battle to see how good he really got! Will the pupil outdo the master? Try to defeat her on the following three custom songs:

You are going to use the arrow keys for this reaction time game, pressing them at the same time as arrow symbols are matching above Boyfriend, and you have to keep this up until the end of the song, where the progress bar turns towards you, and then you win, simple as that.

But, of course, the charts of the songs are not that simple, so if you don't focus and miss hitting too many notes one after another, you lose the game and have to start again, so do not let that happen for anything in the world!