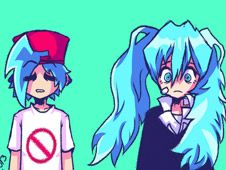 Hakune MItsu becomes Boyfriend's Big Sister in this new FNF mod, where you have to measure up your musical skills against the first-ever virtual idol, on an awesome song called 'Rolling Again'!

BF Vs Big Sister, but it's Hatsune Miku Rolling Again!

As the song progresses, when arrow symbols float and match above BF, that is when you need to press the identical arrow keys to hit your notes and do it until the song's conclusion to win, when the progress bar is fully towards you. Be careful not to miss hitting notes too many times in a row, you'll have to start again from scratch. Enjoy!