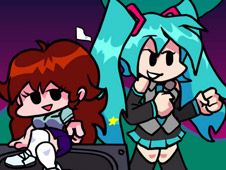 What is Golf Minigame ft. Miku?

There are so many new FNF mods appearing on the internet day after day, sometimes you don't even know where to start, but we really appreciate those that try to do something a little bit different from the norm, just like it is the case now and here with the game called Golf Minigame ft. Miku, a mod that brings golfing into this world of music and dance!

How to play the FNF Golf Minigame mod:

Here, instead of a music battle, Boyfriend and Carol are going to battle against each other by golfing, so when Girlfriend, who is sitting on the speakers, throws a golf ball at them, you have to press the keys that GF tells you, so remember very clearly that in this game you need the sound to be on, otherwise you won't know when to hit the ball.

Hit enough balls with your golf club and you win the game, but if you miss hitting them too many times in a row, you lose. Of course, as the title says, Hatsune Miku also appears in the game, cheering you on, and it is always really fun when she appears on-screen, so if you want more of her, make sure you have a good rhythm!