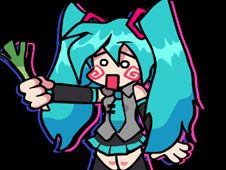 What is FNF: The Intense Singing of Hatsune Miku?

You already know her, you already love her! Hatsune Miku is the first and most popular virtual idol, a hologram of a songstress from Japan who skyrocketed in popularity ever since her debut, and she is now a brand new antagonist to face off against in a musical battle. She might have been featured in this category before, but this time you will play against her on songs that are way more difficult than the ones from the original, so we hope you are ready!

Defeat Hatsune Miku by giving your best, no matter how difficult the song is!

Hit play, and then go through one song after another, trying to reach their end and play their notes so well along the way that the progress bar turns fully in your favor, simple as that.

To achieve that, you need to press arrow keys at the same time as arrow symbols above BF match with one another, but be careful not to miss too many notes one after another, since that means losing the game. Have fun, that is what we hope you come out from this game!