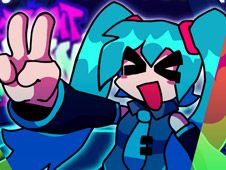 What is FNF: vs Miku Hatsune v2?

Hatsune Miku, the virtual idol anime girl is already quite popular in our category of Friday Night Funkin' Games online, so, of course we would be excited that right at this moment we could share with you her mod once more, but this time in its second full-fledged version, where you have six additional songs to the first three ones, with this being the full list:

Out-idol Miku at her own game: music!

Whether you decide to face off against this music rival in the story mode or free play mode, your goal will be the same, which is reaching the end of the songs by playing all of their notes according to their charts.

This is done by pressing arrow keys at the same time as the arrow symbols above BF's head are matching with one another, but know that if you miss doing that too many times in a row, you also lose the game.

Good luck to you all, and we hope to see more of you here, of course, since more fun games are still on their way, only for you!