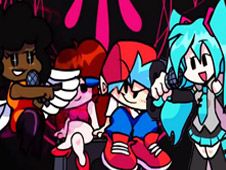 What is FNF: Miku and Carol sings Gospel?

Two fan-favorite girls in the world of Friday Night Funkin' Games online are without a doubt the iconic Miku and Carol, who oftentimes get paired together in games, but this time they are not as friendly, as they will go up against one another in a rhythm battle on the equally iconic song known as Gospel!

Miku Vs Carol, the battle you did not know you needed!

When the arrow symbols floating around Miku match above his head, at that moment you will have to press the same arrow keys on the keyboard, and you have to keep doing it until the end of the song to win.

Be careful not to miss pressing the keys too many times in a row, or you lose the whole game and have to start it again, starting from the top of the song. Good luck, enjoy!