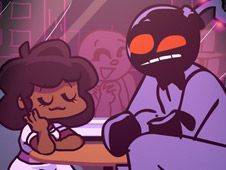 What is FNF Carol and Whitty Date Week?

Today we are giving you a special kind of new FNF mod to play, right at this moment, since we're taking attention off of the series' most popular couple, Boyfriend, and we're going into the lives of Carol and Whitty, who seem to have gone on a date. Of course, since both of them are music enthusiasts, they are going to have a musical battle/duet in order to express their feelings, and they will do in on the following custom songs:

A FNF mod of love is here, play it now!

The game can be played in the free play mode as well, as usual, but we recommend checking out the story mode if you want to see the true ending of this story where Whitty and Carol are going on a date.

When arrow symbols above your character are matching with one another, press the very same arrow keys on your keyboard to hit those notes in the song, and to this to their end.

If you reach the end of the songs playing them correctly, you win, but be careful not to miss too many notes in a row, or you lose the whole game. Enjoy!