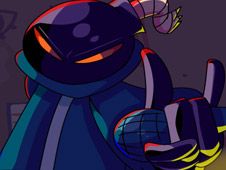 What is FNF vs Whitty Remixed (Full Week)?

Whitty, the man with anger issues whose head is a bomb is back again for fun, as he is the latest antagonist that you and BF have to face off against once more, but this time with new graphics, sprites, backgrounds, and remixes of the original songs, and since both this character and remakes are very well received, we're sure the fans of this series will start playing the game right away! These are the songs:

Do you have what it takes to defeat Whitty once again?

If you think so, then do it in either the story mode or free play mode, and give it your best to reach the end of the songs, playing their notes correctly, according to the charts, until their conclusion.

When you see the arrow symbols above BF match with one another, make sure to press the same arrow keys at the same time, but if you get it wrong too many times in a row, you lose, so be careful. Enjoy!