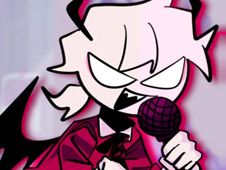 What is FNF vs Selever Full Week?

Selever is a background character who first appeared in Mid-Fight Masses, together with so many other demons and quirky characters, but it seems that he finally has his own mod where he is the main character, but not the protagonist, since Boyfriend is fighting against him in a musical battle, so you need to help our blue-haired boy defeat him on all the following songs:

Whether you are facing this character in the story mode or free play mode, you've got the same goal of reaching the conclusion of the songs to win, which only happens if you play their notes at the right times in the charts.

To do this, watch for when the floating arrows match above BF's head and press those arrows on the keyboard yourself. Be careful not to miss pressing the keys too many times in a row, or you lose the whole game. Good luck, and tons of fun we want to wish for you all!