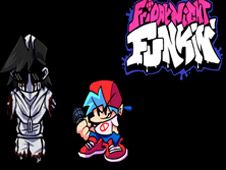 What is FNF vs Gold/Lost Silver Full Week?

Two new scary opponents have challenged Boyfriend to a rhythm battle, and you now need to defeat them on three awesome custom songs, something we invite you all to do with this awesome full week mod, and the songs are the following ones:

Whether you play in the story mode or free play mode, the way to win remains the same, and it is by reaching the end of the songs, which only happens if you play all their notes according to the charts.

To do this, you watch for when arrow symbols match above BF's head and press the identical arrow keys. Don't miss doing it multiple times in a row, or you lose the whole game.

We wish you good luck, all the best in the world, and we invite you to stick around for more games with FNF still to come, only for you!