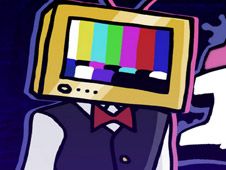 What is Friday Night Funkin vs Displo Full Week?

In Friday Night Funkin vs Displo Full Week, the newest FNF mod by EricFoda, Boyfriend, and Girlfriend meet Displo, a bartender with a television for a head, whose only thing he knows how to do is to serve drinks, but after Boyfriend worked him so hard that his screen broke, the two are now going head to head in a rap battle, and it's your turn to help BF win!

How to play the Displo mod:

Firstly, get to know Displo, who is a robot whose body is that of a really tall man, dressed up in a tuxedo just like many other classy bartenders, whose screen is black in the original version (Static Salon), has colors for the Intermission version, and in his third form, the No Signal one, his screen is broken. The three names of his forms are also the names of the songs you will do a rap battle against him.

Of course, what you do is press the arrow keys at the correct time when their symbols from the screen are matching, and if you do that correctly enough times, you win the duel but don't have too many misses, because you will lose instead.