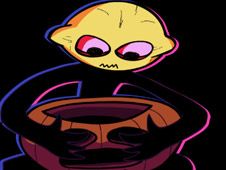 What is Friday Night Funkin vs Pumpkin Pie Full Week?

Pumpkin Pie is s a creepy monster that looks like a pumpkin pie turned to life, which has lots of eyes and has scared Boyfriend easily, so he has to defeat it in a musical battle to finally get out of this horror show! You've battled this antagonist before, but this time you're doing it in the full week version, where you've got even better animations, sprites, and, of course, more awesome songs:

You are going to use the arrow keys to play the notes of the songs at the right moment, which means that when you see arrow symbols above BF match with one another, you have to press the very same keys on your keyboard so that you follow the charts.

Be careful not to miss too many notes in the song's charts, because if that happens you lose and have to start the game all over again from scratch.

Good luck, enjoy, and make sure to stick around for all the fun still to come!