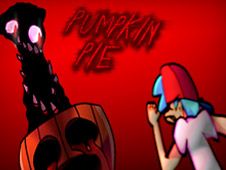 What is Friday Night Funkin vs Pumpkin Pie?

Yes, today will be yet another day when you get to play some awesome new FNF Games online for free on our website, just like it happens every other day, which is why we are excited to share with you right now the game called Friday Night Funkin vs Pumpkin Pie, a must-play for all the many fans of this franchise!

Meet Pumpkin Pie, one of the scariest FNF antagonists so far!

This game is going to be perfect for Halloween since Boyfriend has to have a rhythm battle against a Pumpkin Pie that came to life, but it's not cute, sweet, or nice at all, because it has become a real monster, with blood coming out of the pumpkin's eyes, and its form is a dark shadow with a big mouth and spiky teeth, as well as red scary eyes. Pumpkin Pie and North are the two custom songs featured in this game.

Become familiar with the FNF gameplay right here, if you're new to the series:

Through the custom songs, you have to help Boyfriend defeat Pumpkin Pie, so you need to have better timing so that you get all the notes of the songs at the correct time. When you see the arrows on the screen match one another, press the same arrow on your keyboard, at the same time, and sing the song correctly.

If you miss too many notes one after another, you are going to lose, so make sure you are not letting that happen for anything in the world!