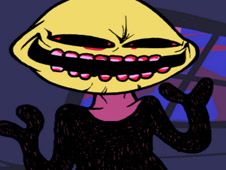 What is FNF vs Lemon Demon FULL WEEK!?

The Lemon Demon, also known as Monster, is a recurring character in the franchise of FNF which even appeared as a surprise antagonist in the original game, with him now getting his own full week mod, where he has more than one song, brand new sprites, backgrounds, animations, and dialogues, and a dose of fun for you as you help BF defeat him!

There are four songs for you to battle this character in:

Pick if you want to duel this character in either the story mode, or simply pick a song you want from the free play mode, and give it your best, have focus, and reach the end of the songs by following their charts to win!

This means that when it is your turn in the song to sing, you will see arrow symbols above BF match with one another, and you have to match the keys and timing and press the very same arrows on the keyboard.

Keep at it until the end to win, but be careful not to miss too many notes in a row, because if that happens you lose and have to start all over again from scratch. Enjoy!