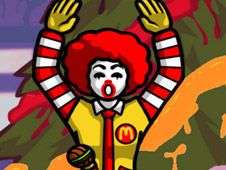 What is FNF vs Ronald McDonald Full Week?

Ronald McDonald is the clown mascot of McDonald's the world's most popular fast-food chain, and he is the newest antagonist that Boyfriend has to face off against in a musical battle, something you might have done here before, but he only had one song at the time. Well, now he brings along three new songs in this awesome full week game:

You can choose to duel against this character in either the story mode or the free play mode, it is totally up to you, and in either of those, you've got the same goal, which is to sing so well that the progress bar turns in your favor by the end of the song.

To achieve that you need to press arrow keys at the same time as arrow symbols above BF match one another since that is how you follow the chart, but you must be careful not to make too many misses in a row, or you lose the whole game. Good luck!