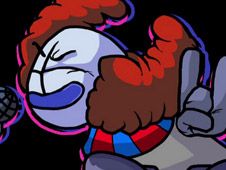 Tricky, the evil clown from Madness Combat, has many phases to his anger and craziness, but before phase 1, which is where he officially become crazy, he was in a more normal state in phase zero, the phase at which you encounter him right now and here in our latest FNF mod called FNF: Tricky Phase 0 Full Week, which brings along for you three original custom songs:

Defeat Tricky's Phase 0, just like you did all his other phases!

For starters, pick if you want to play this game in either the story mode or the free play mode, and in both of them, you've got the goal of reaching the conclusion of the songs and playing all their notes along the way.

To do this you use the arrow keys, keys that you have to press at the same time as the arrow symbols above BF match with one another, but know that if you miss doing it too many times in a row, you lose and have to start again from scratch.

Good luck we want to wish you all, and we want to invite you to keep playing the awesome games we still have to offer you!