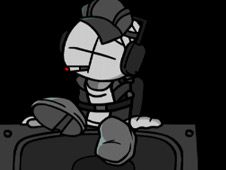 Yes, Tricky, one of the most encountered antagonists from FNF is back, and this time you can see him in his Phase 0, a phase where he was not yet the evil clown that you already know, and in this game, instead of having Boyfriend face off against him, you will instead take on the role of Hank, another popular mod character!

Hank Vs Tricky, who is better?

Well, we hope that you, meaning we hope that you play the role of Hank very well and use your inner rhythm and musical sense to defeat Tricky, taking the songs to their end and turning the progress bar in your favor.

You will use the arrow keys to do so, pressing them at the same time as arrow symbols above Hank match with one another, and if you do this to the end of the song, you win!

Be careful with your timing and don't tap on the keys at wrong times too many times in a row, or you lose the whole game and have to start it all over again from scratch. Enjoy!