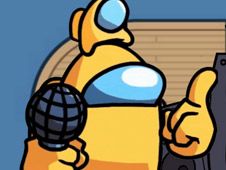 What is FNF: Imposters v4 (Fanmade)?

While the fourth version of FNF Vs Imposter has not appeared yet, fans have been hard at work and created one for themselves, a brand new version where you get to go up against imposters such as Green, Yellow, Red, and White, with four awesome tracks, one for each of your sus antagonists:

Only with good rhythm can you get rid of the sus imposters!

Whether you challenge these colored astronauts in the story mode or free play mode, the goal you have is the same, and it is to reach the end of the songs by playing all their notes according to the charts since that is the way to win!

This means that when you see arrow symbols above BF match one another, you will need to press the same arrow keys from the keyboard, making sure to get the timing wrong!

If you don't, or you press a wrong key, that is a miss, and if you have too many misses in a row, you end up losing the game and having to start the battle from scratch. Good luck, we want to see you WIN!