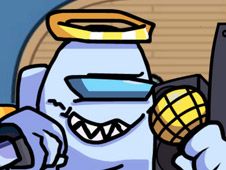 A brand new week with fresh new songs has just been added into the fanmade version of FNF Vs Impostors, as the fans have taken it in their own hands to create the latest version where you have tons of fun going up against colorful astronauts in rhythm battles, something you will now do on the following songs:

Once more, use music to eject the impostors out of the spaceship!

After choosing between playing with dialogues and cutscenes in the story mode, or without them and just the songs in the free play mode, either way, give it your best to reach the end of the songs in order to win.

How do you do that? Well, you watch for when arrow symbols float and match above BF's head, and at the same moment, you press the identical arrow keys from the keyboard.

Be careful not to miss pressing the keys multiple times in a row, because if that happens, you lose and have to start all over again from scratch. Good luck!