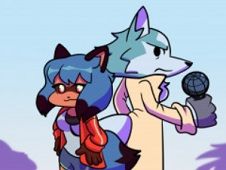 This time Boyfriend and Girlfriend are dressed in the most famous anime characters: BNA: Brand New Animal anime in the new Friday Night Funkin' Mod in which you will have to dance for 6 consecutive weeks with the most popular animals of the BNA series. The songs from all 6 weeks have remained the same, but the design of the characters and the game is completely new and spectacular.

-It seems that you are having good time together. However your fun ends here as I take that tanuki girl with me.

-Like hell you'll take her away, did Alan sent you!?

-This is non of your concern

-If you want to protect your so called girlfriend, you will have to beat me first.

-Very well, then, bring it on!

-Whoah hey there Jackie and Arai; I dint expect you two to be here.

-What are you two even doing in this abandoned mansion anyways?

-Oh, we're just scavanging this place to see if theirs something to salvage and sell.

-Anywho what are you two even doing here?

-Lets just say we're in a middle of finding a certain someone around here.

-Of course its obvious that you two aren't the ones we're looking for.

-Well in the meantime how about we do a little rap battle eh?

-Sorry we're kinda busy here at the moment and...

-Sure, I don't think Shirou would mind.

-Erm..you know what? Yeah what she said.

-But din't you just said before that you two were busy?

-Wow...I gotta say I never seen the stars this bringht before.

-You know, I feel quite relaxed with you being by my side at this moment.

-Who would've thought that ever since we've met each other at the beastmen festival.

-That we would eventually start dating for the first time.

-Hehe I'm as surprised too that we came a long way.

-Hey their Michi it's nice seeing you two for once after a few weeks.

-Funny enough I would've been here much sooner if I did't flew to the wrong direction.

-I think I flew to see place called New-Grounds from What I recall?

-Oh Shirou and I are just looking upon the stars for our first date.

-Fine, one rap battle and Michiru and I are outta here.

-Jezz Shirou you're really a mood killer you know that?

-So let me get this straight, you and Shirou are now dating for the first time? And started dating since four weeks ago?

-Yep, thats all theres to it.

-Hm...to be honest he doesn't seem to look like much.

-Neither do you since you barely helped out during that nirvasyl incident.

-Hey I'm an idle. Besides many humans and beastmen look up to me and its my job to deliver.

-Besides if you wanna date my friend Michiru, you gotta get to me first.

-Guess you two were able to make it in time for the Human/Beastmen celebration after all.

-I heard that you two started dating so how was it to be exact?

-Well how about some music to amp you two up in a positive mood, what do you say?

-hmm...good idea! You wanna give it a go Shirou?

-I can't rap battle you two without getting closer.