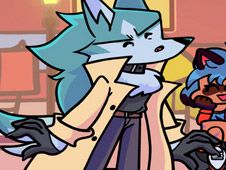 What is Friday Night Funkin Vs Shirou Ogami (BNA)?

Netflix keeps on releasing some of the best new anime in the whole world, which is what they did in the past year as well, with one of those anime being the one and only Brand New Animal, also known as BNA, with one of the main characters in the show being Shirou Ogami, a man who can transform into a white wolf, and is said to be the protector of the beast people.

Boyfriend has somehow ended up in his universe, and only if you work together to defeat him will you be able to send him back to his world. This is a full week mod featuring the following songs:

Show the beastman who's got the better rhythm!

You will start off by choosing between the story mode or the free play mode of the game, and in both of them, you've got to give your best to follow the charts of the songs accordingly, hitting all the notes to win the game.

When you see the arrow symbols above BF match above his head, press the same arrow keys, and keep doing it until the end of the song to win.

If you miss doing that too many times in a row, you lose the game, so be careful not to let it happen. Good luck, and enjoy!