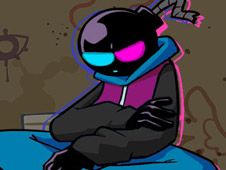 What is Friday Night Funkin’ vs Whitty Neo?

Whitty is back, and this time in his Neo form, with brighter and more futuristic colors in his look, with his songs having been remixed, there are new charts as well, and all-around cool new neo graphics, which is why this is the latest must-play FNF mod our team highly recommends to each and every one of you right now!

In either the story mode or free play mode, the songs you find are the following:

When it comes to your turn in the song and you see arrow symbols above Boyfriend's head matched with one another, make sure to press the same arrow keys on the keyboard, and keep doing so until the end of the song to win.

Of course, this also means that missing notes is bad, so be careful not to let that happen too many times in a row, or you lose the whole game and have to start all over again from scratch. Enjoy!