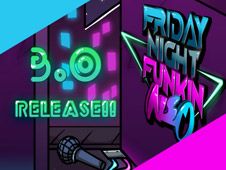 Futuristic backgrounds and music, cool new designs for your favorite protagonist as well as his rivals, all-new colors, sprites, icons, and more will now be included in Friday Night Funkin’ Neo V3, which is the latest version of the FNF NEO game, with our team being very happy that right now we had the chance to share it with you all.

This game is playable in three versions, all the way to Week 5 for any of them, in both the story mode or the free play mode. The three versions are:

You pick the one you want to experience, as well as the mode, and then give it your best to reach the end of the songs, play all their notes accordingly, and win! When the arrow symbols above BF match one another, make sure you press the same arrow keys yourself and keep doing it until the end of the charts.

Be careful not to miss pressing the keys too many times in a row, since that will mean you eventually lose, and we're sure none of you want that to happen, right? Good luck!