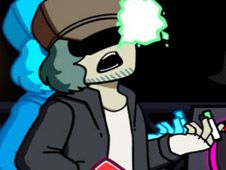 What is FNF vs Neo Garcello?

Garcello now becomes his Neo versions, a brand new iteration of this character that you have to defeat in our category of rhythm games, where you challenge him on the following songs:

Are you ready to challenge FNF's Neo Garcello?

Choose between the story mode and free play mode, and, then, give it your bet to reach the end of the songs by playing all their notes according to the charts, the ultimate way you achieve victory!

When you see arrow symbols match above BF's head, press the identical arrow keys, and keep at it until the end to win. Don't miss doing that multiple times in a row, or you have to start again from sratch!