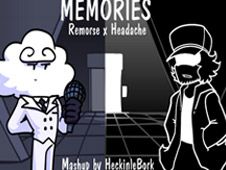 What is FNF: Updike vs Garcello?

Garcello is the character that you become in our newest FNF mod, instead of Boyfriend, and you need to help him defeat Updike, a man whose head is a cloud and wears an all-white suit. Memories is the name of the song that they are going to sing, and it is a mashup between Remorse and Headache.

Updike Vs Garcello, a duet for the ages!

When you see the arrow symbols matching above Garcello's head, you need to time it so that you press the very same arrow keys and follow the song's chart all the way to the end when you win, and the progress bar will be turned towards you.

Be careful not to miss pressing the keys too many times in a row, because if that happens, you lose the game after a few misses, and have to start the song all over again from scratch.

Good luck to you all, and we definitely hope to see more of you here, since the fun never stops!