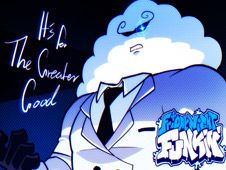 What is FNF vs Updike V2?

The FNF Updike mod has now gotten its V2 version with new songs, remixes, better graphics, and a different story, so have fun going up against this suited cloud gentleman on the remix to 'Remorse'!

BF Vs Updike, the second battle!

Watch for when arrow symbols float and match above BF's head, and when they do, press the identical arrow keys to hit your notes, something you have to do until the song concludes to win. If you miss hitting notes multiple times in a row, you lose and have to start again from scratch. Good luck, enjoy, have fun!