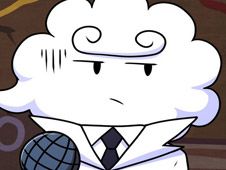 What is FNF Vs Updike?

Today is yet another day where on our website you can find and play some of the best new Friday Night Funkin Games online, the reason why right at this moment you can see on our website the Friday Night Funkin Updike mod, a mod we don't think you've seen before in many other places, so if you are a really big fan of the franchise, missing it out should be out of character for you, that's for sure!

Help BF defeat Updike so that GF can be free!

Updike is a mafia boss who wears an all-white suit, and the reason for that is that it goes with his head, which is actually in the shape of a white cloud. After kidnapping GF, you now have to defeat him in a rhythm battle for her freedom, something you do on the custom song called Remorse.

To play you need the arrow keys, arrows you press at the same time as the arrows match above BF, where the symbols are so that you sing and hit all the notes of the songs at the right times. Don't press the wrong keys, or get the timing wrong too many times in a row, since that means losing the game. Good luck!