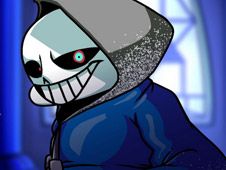 What is FNF: DustTale Remastered v2.0?

Not only can you battle Sans from undertale once more, this time on a total of nine songs, many of them new and wholly original, but this is also a remastered mode, meaning that you will have new graphics, backgrounds, sprites, and cool new stuff every step of the way, so we hope that if you are to play only one single FNF mod today here, FNF: DustTale Remastered v2.0 is going to be the one! The following songs are featured in this remaster:

You can play this game in either the story mode or the free play mode, it's up to you, and in either of them, your goal is reaching the end of the songs, playing all their notes along the way according to the charts, since that is how you win.

To do this, use the arrow keys, pressing them at the same time as the arrow symbols above BF's head match one another, and if you keep doing it until the song ends, you will have won.

Be careful not to miss pressing the keys too many times in a row, because if that happens, you will have to start all over again from scratch, and it would be a shame not to win it. Enjoy!