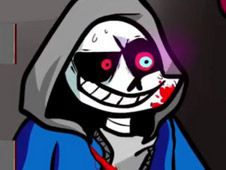 What is Friday Night Funkin vs Dusttale Sans?

Dusttale is the alternate universe webcomic to Undertale, from whom we've already had characters featured in plenty of FNF Games on our website, and today we get to have Dust Sans as the antagonist in this game, although he is the protagonist in that series, and he brings along new music and fresh fun for you to have, so you've got yet another new must-play game on your hands!

Meet Sans from Dusttale and learn how to defeat him!

Dust Sans is a white skeleton who wears pink shoes, black shoes with a white line on them, and a blue jacket with a grey hoodie underneath it. He holds a knife in one of his hands, which he uses to fight the humans he detests so much, but upon meeting Boyfriend, he will fight him with the microphone, in a musical battle on the songs called:

Rhythm is the name of the game, meaning that you have to hit all the notes of the songs at the right times, using the keyboard to do so. When arrows match above Boyfriend's head, press the same arrow on your keyboard, and if you do it at the same time, the not is hit, but if you mess up the timing, and do it too many times in a row, you lose and have to start all over again from scratch!