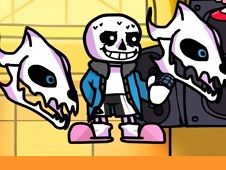 What is Friday Night Funkin' vs Sans from Undertale?

Today we invite you to play online a new mode from the Friday Night Funkin 'series, offered for free by Play-Games.com in which you will meet Sans from Undertale.

Sans is a fictional character who was born in 2015 in the game Undertale which represents a comic character. At the same time, he is present in that game at the last level, so he is the most important enemy you can have in the Undertale game.

He has the appearance of a skeleton, being in fact a child who can scare you by his appearance very easily. Its color is white, just like the bones, and in its hand it has a skeleton head, and as clothing, it wears a blue-turquoise jacket.

use the arrows to dance as well as you can!