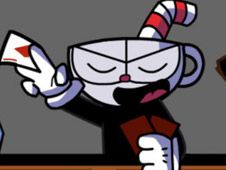 It's Pasta Night again in FNF Games, but this time it happens with characters from Indie Cross, meaning Cuphead, Sans, and Bendy, with whom it is always quite a blast to sing!

It's time for FNF Pasta Night with Cuphead, Sans, and Bendy!

When you see the floating arrow symbols match above your character on the right, press the identical arrow keys to hit your notes, doing it until the song ends to win. So, be careful not to miss doing that too many times in a row, since that will lead to your loss. Good luck, enjoy!