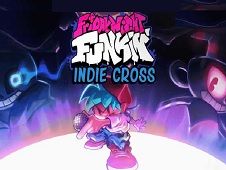 What is FNF vs Indie Cross?

Multiple characters from indie video games have realized that they can't defeat Boyfriend alone, which is why they have teamed up to challenge him, with you having to defeat them, and we're talking about Cuphead, Ink Demon, and Sans, whom you challenge on the following songs:

Use rhythm to defeat the indie video game characters!

Whether you face these characters in the story mode or free play mode, the way to win is the same, and it is by reaching the end of the songs and by playing all their notes according to the charts.

To do this, you watch for when arrow symbols are matching above BF, and press the identical arrows from the keyboard. Make sure not to miss doing it multiple times in a row, or you lose the whole game.

New notes are added to this game, as new mechanics, so avoid the blue bone notes, the sin notes, and the ink notes, but make sure to hit the orange bone noes. Good luck we wish you, and all the best, as per usual!